Sphere Made of Cubes Made of Triangles "Six Trajectories of Time Space"
Sphere made of cubes made of triangles.
Compass and straightedge, pencil and ink on paper.
February 2, 2013
Alberto J. Almarza
AA13

Watch a frame by frame clip of the making of this sphere.

To me, the real magic of this drawing ("magic" which I don't take credit for: it's just the geometric nature of things!) is that this 3-dimensional sphere -and infinite other forms- can emerge from something as simple as a grid of triangles. I call this grid "Hexagrid", but you know, it probably has a real name somewhere out there in math. How many triangles do you see in this image? If you look close enough, I say a whole bigillion of them, right?
Can you see the cubes? They are EVERYWHERE, in different sizes, going in six directions at once: up, down, forward, backward and side to side!

But in order to be able to visualize this drawing fully, I first had to  be in the proper frame of mind...

Well, it all began with Minecraft.

Yes, I am a 31 year old, grown man, and I play Minecraft!
My excuse is that I have an 8 year old son who I play with, but mostly that the game is frickin AWESOME, specially for creative types! Excellent way to waste my time! :]
Though I am tempted to tell you all about Minecraft and our "creations", I'll just tell you the short story. 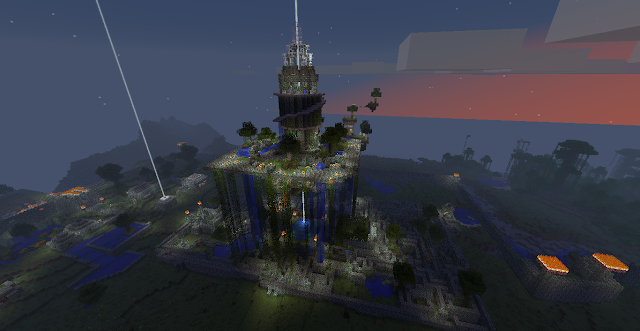 After we built -block by block- our Castle in the Sky Maze (complete with traps, riddles and secret treasure chambers) we were ready for a new challenge. We had a lot of fun making the towers; trying to make them round.

You see, round things in Minecraft are not all that simple at first, because the game is pixel-based, so all objects are cubes. I became excited about this idea of making circles (no news) but this time in minecraft.

How do we get circles out of squares, and spheres out of cubes?

To this endeavor we dedicated a whole new world: a world in progress I called Radiolarian Garden Sculpture Park, which I may show you one day (if I don't completely guilt trip myself out of playing minecraft first...) 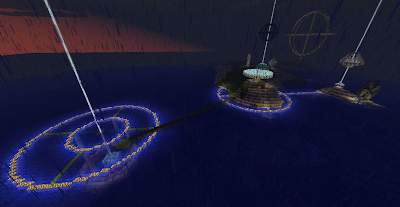 You know when you do something for a bit too long... and then you start seeing it everywhere? and, are you obsessive like me?
Well, working on this world I started thinking/drawing about circles and squares and cubes and spheres... and then, WOW,  it suddenly hit me:

It is possible to draw two-dimensional representations of three-dimensional spheres made of isometric cubes derived from regular hexagons made of equilateral triangles!!! Whaa?!

(It was one of those excellent moments of like: "I'm a total dork. But i dont car.") And that's the end of the story of that drawing.
Hope you enjoyed!
Thanks for visiting!