Some Goddess is Around...

There has been some Goddess themes running throughout my life, and much of my POK and Mummies artwork references the Metasymbol of Goddess or Empowered Female. At this time, some Goddess artworks came out of me, almost without me intending it. 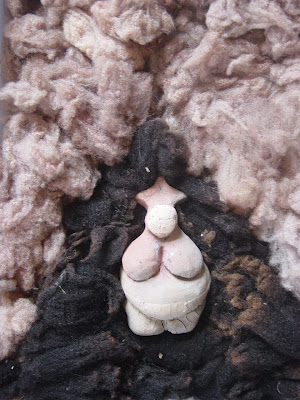 The Goddess theme happens to reocurr in my studies since, in part, it represents Nature (or Mother Earth) which is one of the most (if not the single most) powerful drivers of my work. I also happen to LOOOOVE women, though by now I have opted for "just" one, hahahah!
She happens to be the Goddess in person.
I was amused years ago when learning that in the history of humanity, Goddess worship is far more extensive chronologically and geographically than God worship (or Sun religions), which came about fairly recently (if we compare in historical time). It is fascinating to learn about how this transition came about, and also the many cultural implications and differences between God/Goddess worshiping cultures.

More interesting, are the archetypal attributes of each, and how their roles and tendencies play out every day in the symbolic/mythic drama of Life.

It is extremely important for me to clarify now that I am no Goddess worshiper. In fact, in what I have learned so far, it could be dangerous to be a Goddess worshiper. But far more dangerous at this time in deed, would be to be a God worshiper! (this is where I offend people and they freak out if they are not opening their minds! But fortunately, very few, and very open-minded folks read this blog, hahahaha). Also consider that the greatest crimes against life and humanity have been -and are being- done in the name of one God or another.

The truth of the matter is that, only the integral balance of the male and female attributes can bring about prosperity for humankind (and consequently earth). This, in fact, was one of the great secrets of the alchemists, called the "alchemical marriage". The very simple idea is that neither element is complete wihout the other, and their attributes need to fuse in order to moderate/activate each other. All of this, to some, is no news, but keep in mind that I write in this blog to bridge a gap rather than to simply reinforce what to some of us is ancient knowledge.
At this time, we suffer from an imbalance that has long been brewing, and is now culminating. It is, obviously, a male-heavy imbalance. this is not a literal statement ("too many guys around") but it is rather a metaphorical one (too much "phallicking around"). The overused MAN energy has brought about war, and more importantly, the very ominous possibility of extinction in the face of over-exploitation of the earth. Take a moment to think about the many symbolic connotations of this exploitation or dismissal of the female attribute in every layer of life...

At this time, feminists would hurray this, but I am no feminist either. I do not believe that women should change to find a role in the world or in society, that is closer to the role of man. I think instead, that society should change to accomodate for the Goddess archetype. For example, instead of having more female business-office women, I think we need less offices and businesses! More love, more art, more freedom, more poetry, more peace, more greenery. Less poking and proving, less empiric gaze, less machinery, less banks and phallic skyscrapers packed with debt, paperwork and policies!

Anyhow, while I am not a Goddess worshiper, I might as well be one at this time of imbalance, where really, we either talk to the Mother and caress her, or bury ourselves further, in our own over-productive, over-consuming waste. Ultimately, both roles are extremely important, and the need to unite and balance them is key. Did you ever read the book about women from Venus and men from Mars? I didn't, but if it was any good, it probably talked about this, hahahaha.

I did not want to go into this too much, so I really should stop blabbing and get to the point: the
work. So, without planning to at all, I completed two artworks relating to the Goddess this month.

My great friend, who happens to have the business name of "Mother Moonbeam" and who also happens to be one of the most amazing phisical embodiments of the Goddess archetype in all her power, will be giving birth any day now!

I was given a cast that was made of her belly, to paint on. The idea was to paint something significant to the theme of birth and motherhood for her to have a powerful memory of this unique time of her life. I chose to use symbols in a very deliberate way, as always. Here is an image of the belly cast painting as it is done (except for one cleansing step that we will do at a special birthing ceremony). I also made use of my understanding of Sacred Geometry. 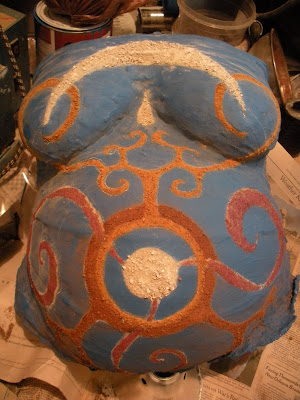 Update: Below is the bellycast finished and activated. Mother Moonbeam is in labor right now! (Sat, Sept 26, 12:36am) 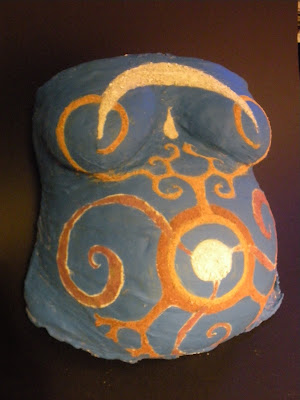 First in the center, there is a seed, or sun that represents the origin of life, and the baby (it's a boy!). Around it is the earth layer which represents the community and context in which this seed is conceived and grown. This layer is made with clay that was extracted from Mother Moonbeam's urban community farm called "Healcrest Community Farm". As you may notice, every layer of a power object such as this is tightly connected to the subject (and to a synchronous Universe), which makes the object "activated" and the prayers and intentions set into it are then succesfully delivered to the physical plane. From the seed stems a three-armed spiral or Triskelion, which I chose as a multilayered symbol. Every three months the orbit of the sun traces a spiral. So in one layer, this is a sun symbol. But three spirals make a period of nine months, conveying the process of pregnancy, thus integrating male and female attributes into one. From the seed grows a tree, representing of many things including growth, prosperity and life force; and roots, which anchor this life-force to the Earth. A powerful moon hovers to simbolize the Goddess (which my friend is quite fond of...) and from it comes a drop of "Moon Milk" simbolizing abundance, rain, fertility and of course, the ever-nurturing mother's milk. It is a work that hopes to embody and materialize the eternal cycle and power of Motherhood, in its most Goddessly sense...

The second artwork I want to share, also very related to all these attributes, came as a response to a call for artists of the Visionary Arts Festival for a show called G-Spot, a response show to the meeting of the G-20 summit in Pittsburgh. The work had to be "sexy".

So again, I thought this was a great opportunity for the Goddess to appear, since: who else is better suited to respond to the Phallic nature of the G-20 summit? and plus, who could be more sexy than the Goddess herself?

Since this time the Goddess atribute was not quite the motherly side but the sexy side, the tone is much different, and I will post it on a clickable link just because sometimes younger peeps see my blog (and their parents might be frightened by the power of certain female features, here "enhanced" hahahah). So here she is: GODDESS and another image of her.

This large drawing is 35 by 55 inches and done using Walnut ink on paper. In this image the ink is still wet...

If you happen to be reading this in time, you could see the actual piece being shown at FE Gallery in Lawrenceville, along with other visionarilly-raunchy artworks, for the opening of "G-spot" on Thursday September 24 at 7pm.

There, we might meet, and talk more about the many things I do not dare say publicly ;)

Look for the skinny guy with long messy dreads and utter to him the secret password:
"I walk in spirals towards the rising Sun" to which I will respond "Do not forget the Moon gives light when the sun does not" to which you will respond with any remark or comment whatsoever, which should fruitfully spark a wonderful conversation, maybe even a heated one.