I have been making small terrariums. 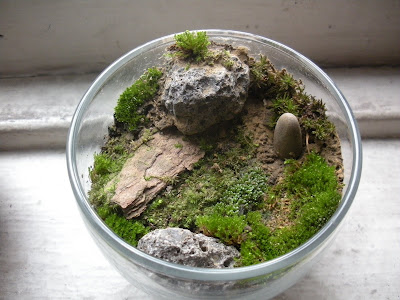 First, there was one. 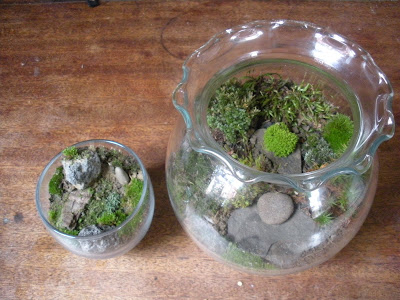 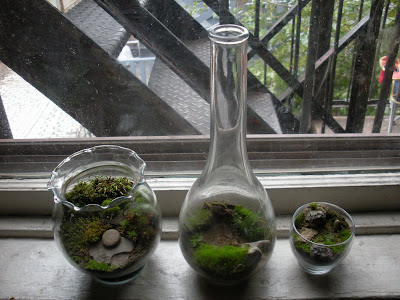 And then three.
Soon, there were many...
It all started by accident, one day in the woods when my son Javi uprooted a tiny patch of moss from a rock. A "car accident", he said. For some reason I felt compelled to take the moss home and take care of it. I put it inside a walnut shell so I could transport it. 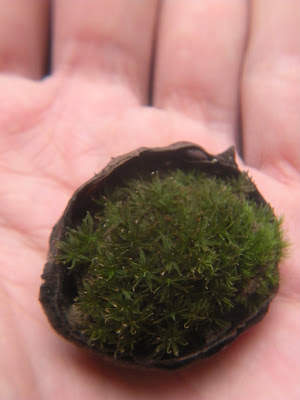 When I got home, all the little moss plants had shriveled and shut close. I was amazed at how sensitive they were. I sprayed them with water once, and watched, in total awe, how one by one, each of the tiny spider plant-like shoots begun to open in real time, before my eyes. For the first time, moss appeared to me as "animalistically animated" and alive, like amoebas or octopuses or hands or eyelashes.
In that moment, I decided I was obsesively fascinated by moss. Hundreds of different species and varieties of miniature, ancient and resilient green creatures that grow in the cracks of our constructed space, slowly and silently plotting to reclaim the world in nature's name.
I begun collecting and caring for different species, trying to observe and learn about their atmospheric likes and dislikes, quiet behaviors, etc. I also did some research and begun understanding some basic considerations and conditions neccesary to support and sustain a terrarium's life.
Speaking of the terrarium's life, let's go a bit deeper into these micro worlds... 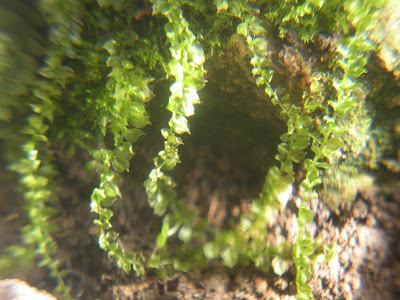 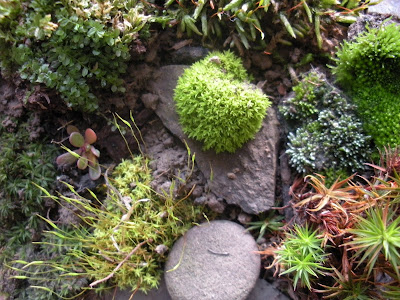 I love these worlds. I love to make them and arrange them, trim them, water them, run around inside them and get lost. And find something. 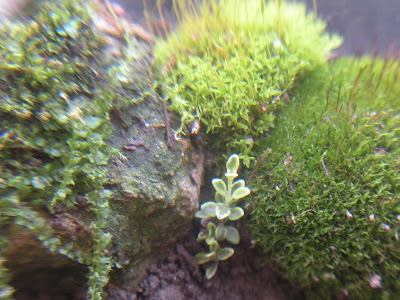 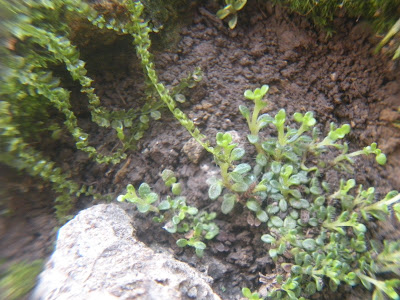 Maybe to better convey the space that I get into when working on and observing these, I can share with you a video I made, called "mysterious micro-world". Also here you can see the sensitive plants I was talking about before. Just so you know, there is no effects on this video, no changing of its speed or anything. Only the creatures, a musical piece I made in 2006 and Javi's finger. 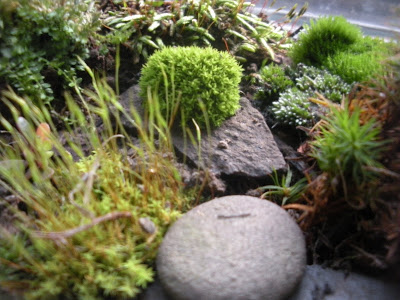 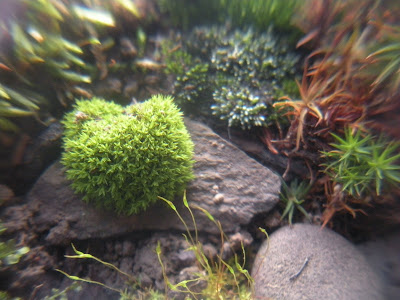 After a little while the terrariums were cluttering my kitchen. I felt like I wanted to keep making them, but there seemed to be no room. I also had to work on an exhibit for which I had to create 25 artworks that were 5 inches or less. I put it together and decided to make terrariums for it.
After a lot of research, I begun collecting all the materials I would need. This took a long time, since I had to find and prepare the proper environment, select and collect compatible specimens, and put it all together. Then regulate the atmosphere, find the right balance of moisture/soil/container/plant, and sustain the contained balance of a new living environment. But I had some experience from the previous terrariums that had worked, so this didn't seem like too much of a risk.
After about a month or two or daily care and regulation, and definitely after some failures and learning experiences, I completed the 25 terrariums. 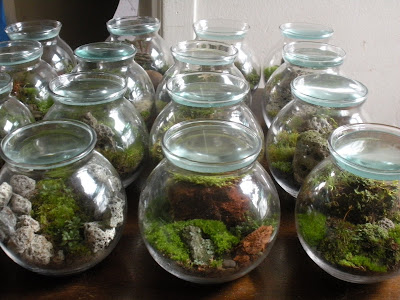 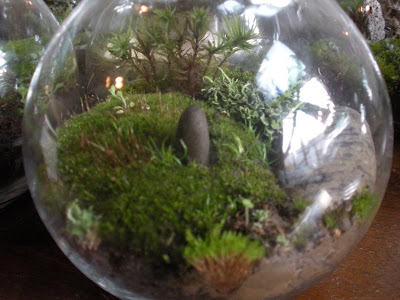 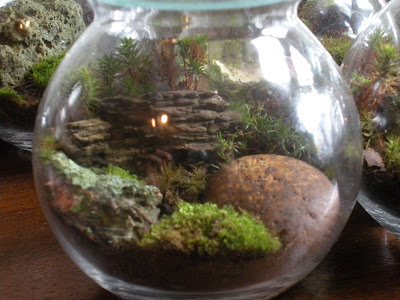 Each terrarium is different and special, and while I have grown a bit attached to them, I am hoping they will find happy new homes. 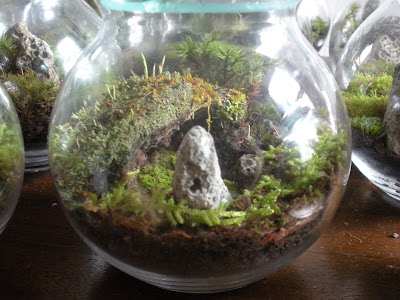 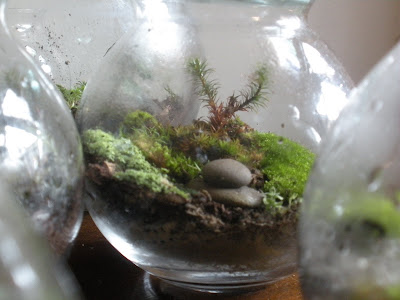 The exhibit is called "25 squared" and it opens tonight, December 10th, 2009, from 7 to 9 (I actually have to get going!) at FE Gallery in Lawrenceville, Pittsburgh . The exhibit runs until January 16th. (Update: It is now 10pm on the opening night, and 16 terrariums have been sold! Wow... So, if you would like a terrarium better get there now!)
Its a cool concept show were 25 artists make 25 artworks that are 5 inches or less. The exhibit looks amazing, with a total of 625 quality works.
I setup the terrariums in these beautiful shelves made by John Mentzler, from Urban Tree Forge. The shelves are gorgeous in themselves, and they really work perfect with the terrariums. 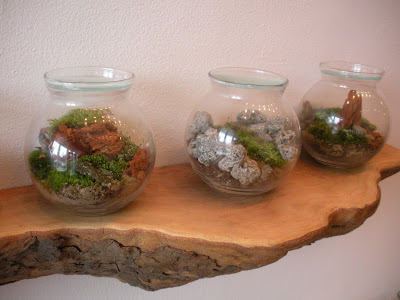 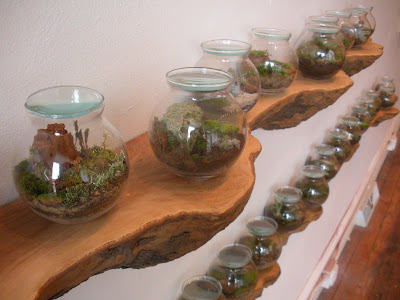 So the terrarium journey has been great so far, and I feel like it is just beginning. I have another large-scale terrarium project coming; an installation piece that I hope gets accepted. But I am going to keep it secret until I actually create and implement it.
For now, it is only an idea... 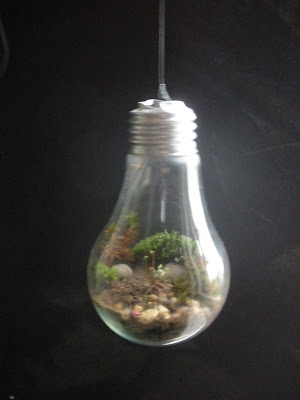