Jelly Visions from Other Space! 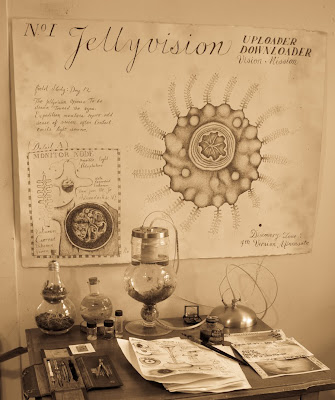 
"This is the work desk of Dr Demetrius Otis (1671- 171_), devoted researcher and breakthrough discoverer of the Jellyvision. While the term Jellyvision is commonly known to identify a particularly abnormal modern state of awareness, Jellyvision is also the common name of the animal itself which is responsible for causing this state. We are referring to an extremely rare Jelly fish of the genus Plamatia Photoforica, of unknown native origin. The original specimens were found by Dr. Otis himself in the outer wetlands of the 4th version of Minnesota. Small cylindrical eggs were trapped inside river-drifted igneous strata, in a state of Anhydrobiosis, or suspended life. He managed to hatch the eggs and breathe what Otis' collaborator Petxis Ukbar recalls as 11 generations of Jellyvision. During this time, Dr. Otis experimented with a specific attribute of the animal which somehow enabled it to interact with human subjects. Worn as a contact lens, the Jelly Vision would hack the neo-cortex of the subject's brain, by means of a simple set of electrical and photovoltaic impulses sent through the eye. The animal was somehow capable of altering the subject's vision inducing hallucination, hipnagogic trance, and what was described by many of the subjects as a "non-physical sense" or "out of body sight". Otis himself experimented with the strange qualities of the Jelly state, discovering only too late that the exchange would eventually prove of unrepairable consequences. Dr. Demetrius Otis left his desk unexpectedly the night of his 11th experiment with Jellyvision, never to be seen again. His legacy is nothing more than the surface residue of an unknown pursuit; some scattered notes and documents, and a couple of unfinished, undecipherable, living experiments." 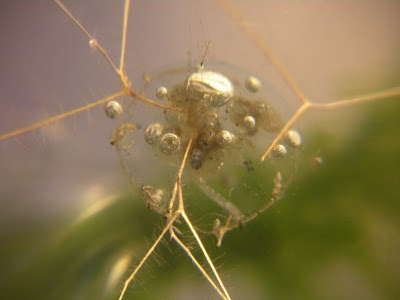 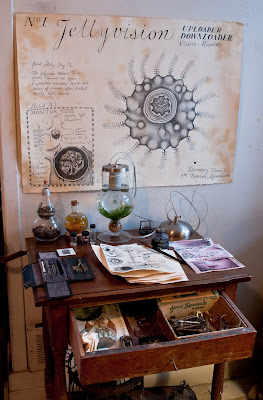 But really, this installation work is a two-person collaboration that I am involved in with artist Ben Matthews, for an exhibit called "Exchange". It was organized by the Associated Artists of Pittsburgh and will open Friday February 5th of 2010 at 530pm, at the Pittsburgh Cultural Trust Gallery on 937 Liberty Av. So technically yes, you are getting an illicit sneak peek...

This desk is an installation that is the result of a prolonged dialog that Ben and I have been engaged in for the past couple of months. Just as the concept of the exhibit consisted of an exchange between an emerging and an established artist, so we exchanged ideas and personal visions, until pretty quickly a collective concept emerged.

Ben was working on a drawing (a main feature of the installation, the poster seen in the above images) about this idea of the Jellyvision. He described how it was a jelly fish that could be worn as a contact lens and alter the wearer's vision. It was a fascinating idea, and very conducive for all the things we had been talking about to take shape. We decided to use the Jellyvision as the central point to elaborate our utopian reality from. 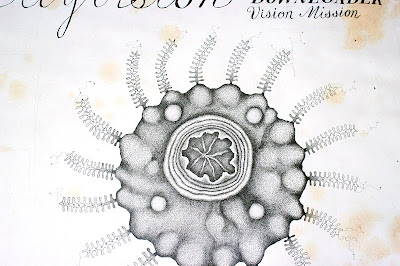 So Ben had created this amazing document to start from, and my imagination was soaring with potential directions and ideas. At the time I was very intently working on terrariums and I also had started becoming interested in aquariums. As I begun to get some clarity, I realized I could integrate many of my interests into a cohesive materialization for this installation. We had talked about this explorer and time-traveler of parallel realms, who we could depict through displaying his artifacts, tools and discoveries. We agreed on a desk that would capture a moment in this explorer's search; a physical time-capsule of his studies and impossible pondering and discoveries.

The concept grew of an "Incubator" or a vessel where the jellyvisions would hatch and grow. I wanted to use real live elements, and so the Jellyvision grew inside a small aquarium chamber, along living plants and even sea snails. This incubator became the main feature of my contribution to the installation. 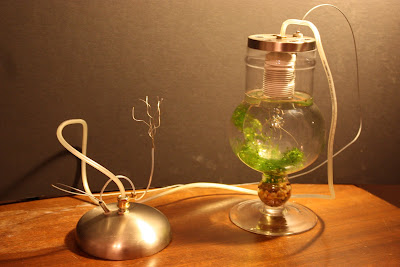 This living environment gives the Jellyvision a depth, and a closer likeness to what its true life in the imaginary realm might be like. 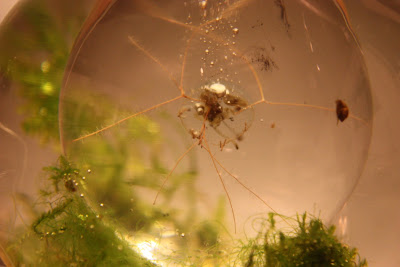 The Jellyvision Workspace also includes other living experiments, journal pages, field photographs, antique tools and other strange objects, all of which account for small clues to the puzzle, for us to continue investigating. 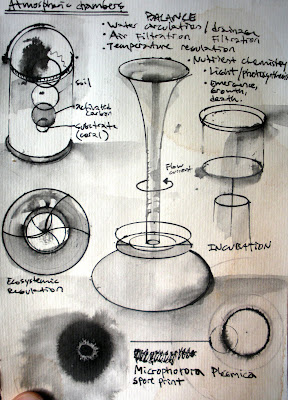 For our artist statement we wrote:

We met in July of 2009, while showing work for a 2-person exhibit put together by Mendelson Gallery. We quickly connected, noticing the common themes and ideas that tied some of our work. We even talked about the potential for a future collaboration, and laughed and fantasized about the possibilities of joining our creative minds into a common project. It was near perfect timing when the opportunity came to participate in Exchange, as we knew it was our chance. Ideas started immediately flowing, and in no time a concept emerged smoothly from our joined excitement.
We found a common archetype amongst us; a character or persona who we felt could act as the medium for our common creation. We defined it as a sort of explorer or inventor who returns from his travels through an unknown territory or dimension, bringing back mysterious discoveries, objects, ideas. We decided to concoct a physical space; a laboratory or workspace, used by the man as a base to conduct the research and experimentation following his field studies. In this case, the man is working on a mysterious discovery: the Jellyvision. It is a form of jelly fish that can be worn as a contact lens, thus possessing the powerful attribute of altering the wearer's vision. While we intend to share a peek of this man’s explorations, we are aware that these yet-unknown worlds will remain as much a mystery to you as they are to him. At least until the next missing link can be recovered...