This is the Island Vessel 1. 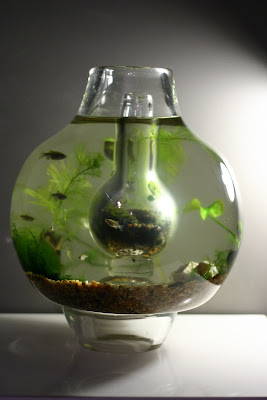 But before it turned into the vessel it is now, it begun as a simple idea. A vessel inside a vessel. A terrarium inside an aquarium. 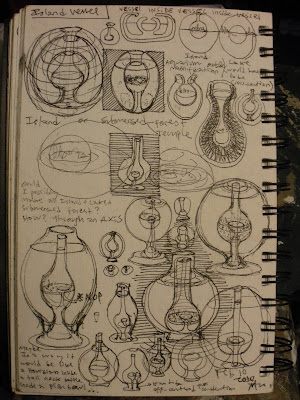 The idea soon turned into sketches... 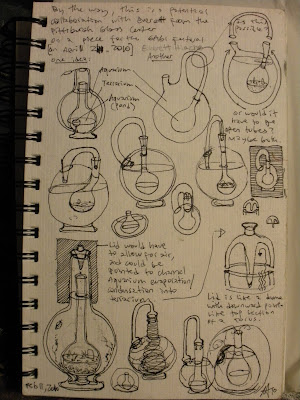 And the sketches became clearer and clearer in my head (as did the potential for the vessel itself to become real, and as did my obssesion with this possibility...) 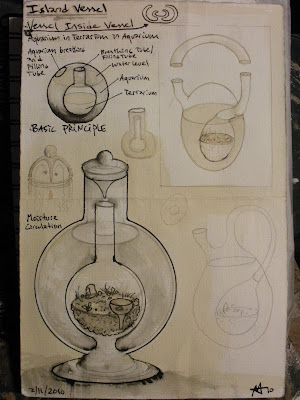 Then, I was ready. The idea was clear as glass to me, and the thought of making it a reality became a persistent fixation in my head: "I haaave to maaake iiit!!"
But having no experience in blowing glass, I had to turn to the life-saving helping-hand of the true experts... 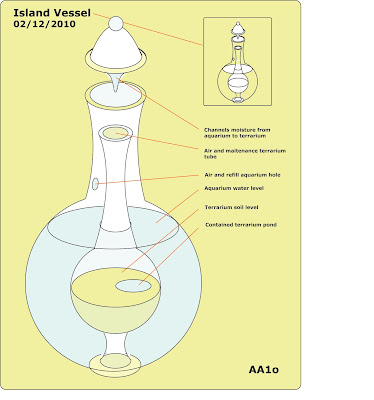 I took the idea with me, to the Pittsburgh Glass Center. I shared my idea with a fine gentleman named Everett Hirche -a local artist and technician at the Center- and asked him if making the vesssel was possible, and if it was of interest to him. He was definitely up for the challenge and excited to help me out, and soon him and a team at the Glass Center were discussing and preparing for the making of the Island Vessel. 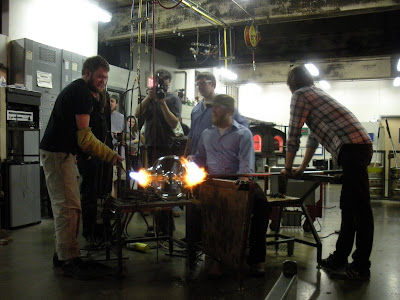 On Friday, March 5th of 2010, during Unblurred on Penn Av, a small team comprised of Everett Hirche, Jason Forck, Steve Stens and Chris Hofman, brought The Island Vessel into this physical world!
To see how things went down the night of the making of the Island Vessel, check this video out (music by my band Shambolish!): 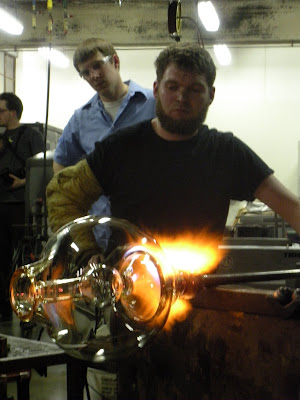 Once the vessel was a full-blown, double-chambered glass piece, I begun building the little worlds inside of it. First I made the terrarium. To do this, I use special tools, some of which I have to make myself. The terrarium contains plants and mosses which I have come to feel comfortable working with, such as 2 species of star moss, violets and a couple of other specimens whose names I don't know. Also in there is a tiny spider and a centipede.
Then, I constructed the aquarium, which contains Java moss, Banana plant, gilled snails and a couple of other snails, barnacles and plants whose names I don't know. There are Ghost shrimp too, and six Zebra Danios.
I showed this piece (unfortunately only for one day) during the GAGI (Geek Arts / Green Innovators Festival) on April 2nd, 2010, along with other of my artworks. 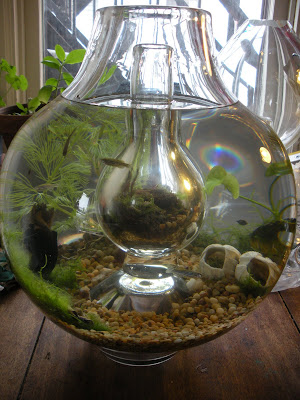 The Island Vessel I (which I also call "my new TV"!) worked just as planned. The magnification produced by the thick concave glass and the water is simply striking. The overal effect is hard to describe or show in the images. It has a beautiful roundedness and definition. As a passionate nature lover, there is nothing more gratifying than observing this active and thriving little ecosystem as if seen through a magnifying lense. I can literally sit to watch this world in a jar for hours!
Also, my ideas as far as the moisture being transferred from one chamber to the other seem to be working great. In the images I do not have the lid on because the terrarium is still too moist to enclose, but Everett did make a special lid that has a sort of drip snout, which conducts drops of condensed water from the aquarium into the terrarium.
Overall, this vessel fascinates me, not because I put it together, but because it is a contained pocket of life; a balanced, living and ever-changing little microworld. 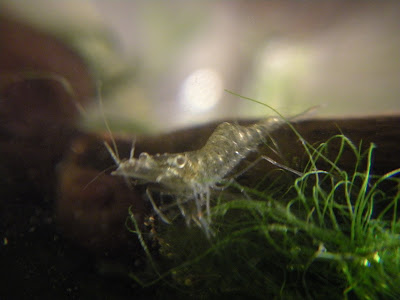 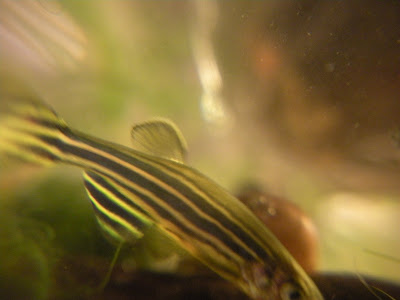 For a slightly closer sense of the qualities of this contained universe, check out this clip of shrimp citizens of Island Vessel: 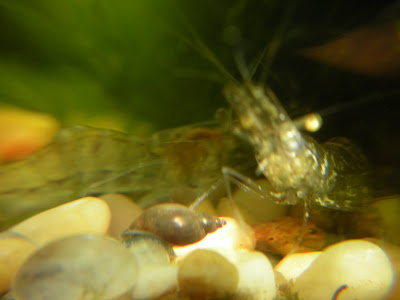 And I am happy to say that I am not the only one to take great pleasure from the result of all this work. Otherwise, without the chance to create a bit of a sense of wonder in others, my work would be pointless. 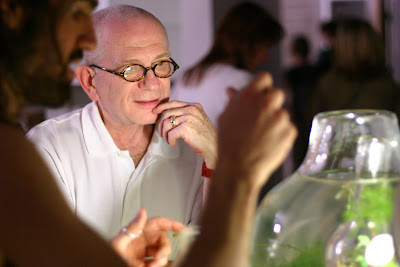 Thank you for your interest, which is one of the things that keep my work alive. 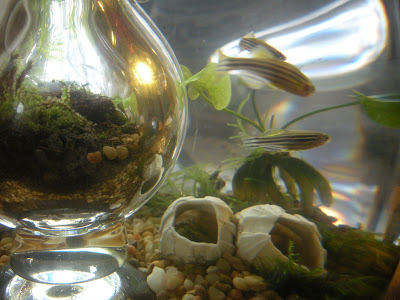