So, here is the final version of my stereoscopic drawing entitled "Outer Technology Reveals Inner Technologies". It works! Of course here you only get to see the stereo pair as it looks in 2 dimensions, but through the lenses the 3D effect is quite effective. To experience this piece in the right way, you can stop by The Irma Freeman Center for Imagination, for a show running until May 7th, themed: "Antiquated and Future (or Imaginary) Technology". Learn more about the IF Center and this show here. 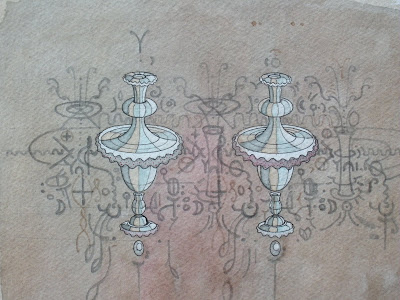 As you may notice, the two sets are not exactly the same, and so some interesting interference is created, especially in the colors of the vessel and in the background symbols. I took some liberties as far as creating very differing patterns on the background, so that when seen in stereo, the peripheral elements are not always in 3D. The result is somewhat similar to a certain optical illusion or effect, where the central object is in focus, but the periphery appears to be in motion, until you look at it directly. I am pretty pleased with this effect: it reminds me of a quantum chamber where the particles are multiple and fluctuating, but as one peeks in, only one particle is seen in the center.


Anyhow, here are some images of how the piece was set at the IF. Just for the fun I made one into a wiggle set. 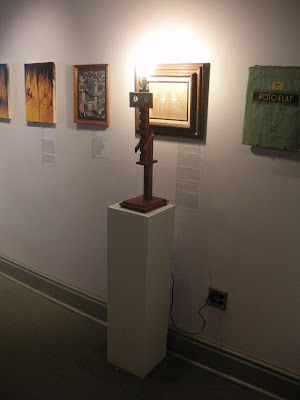 (I love how the canister of chemical next to my piece says FOTOFLAT!)

Finally, here is the statement as it was presented in the show. In there, I finally get to address the actual significance and concept behind the drawing itself, in addition to the descriptions of the optical mechanism (to see more of the initial process, ideation and sketchbook pages go to my previous post "stereo art").

The reason for using a stereoscopic technology (other than the fact that 3d imaging is awesome) is that its mechanics reference the process that our own brain engages in when interpreting visual images. When looking at the (external) world, our two eyes create two separate flat images of reality; slightly different perspectives of the same object. It is our (internal) brain that compiles these two images into one three-dimensional sense. While this phenomenon is as old as our physiology and perception, we normally take for granted the amazing collaboration between external and internal technologies to create –real or otherwise- sensory experiences. It is only more recently that strong interest in this specific optical technology has re-emerged. Today we enjoy movies in 3D that appear to get closer and closer to the likeness of reality. Pretty soon we might come to confirm that what is real is always and only bound to our perception.

The depiction itself is of a personal combination meta-symbol which is very significant to me. It is the Axis Mundi, or “world spine”, which in this case I have fused to the Anima Mundi, or “soul of the world.” These are ideas that fascinate me, and that I have studied a bit. The world axis is a “tube” of sorts which connects realms to one another. Traditionally, the Axis Mundi connects the middle world to the heavens and to the underworld. It is a symbol that can take a large number of forms, and its use is rather universal. The Anima Mundi is the “soul of the world”, also known as God or Spirit, and it is the living force that animates matter, or the life source. Here I interpret the two as one, materialized as a vessel. The vessel is revealed as a type of vision; cloudy, undefined - yet clearly present- and fluctuating between being a solid object and a dream.

Like other of my works, this piece is an object that is broad in scope and multilayered. It is a material offering that references an inner realm or state, which can only be referred to metaphorically, and can only be received on an individual basis. The title of this piece is a direct reference to my most consistent (and at this point repetitive) definition of art, which is: Art is the conscious or spontaneous technology of manipulating physical matter, creating objects that reference non-physical ideas and emotions, that are in turn more closely connected to our transcendental self. An external technology such as art can reveal internal technologies such as knowledge, devotion and passion.

I was going to write more about the Axis/Anima Mundi concept here, but that would require a whole lot more writting that I don't feel like delivering right now. Instead you may be interested in checking out the Wikipedia definition of Axis Mundi. There is enough exciting stuff there to get a whole cosmic revolution started! I also need to catch up with my next post, about the first Island Vessel vivarium. Both this piece and the vivarium were shown during the GAGI (Geek Arts and Green Innovators festival), starting yesterday April 2, 2010.
Don't miss experiencing "Outer Technology Reveals Inner Technologies" while its up!
Thanks for hanging out...