METABIOTIC COSMOS "I May Speak of This Secret Without Using Words"

With the little time that I have to do this enjoyable blogging, I still wanted to take a second to share a bit about the process of creating this piece called "METABIOTIC COSMOS: I May Speak of This Secret Without Using Words".
I happily sold this piece just last weekend, during the Pittsburgh Visionary Arts Festival, which turned out to be a wonderful experience for me, the artists and the public, and I will surely try my hardest to make it happen again in 2011.
Unfortunately, only when I sold this piece I realized I had much documentation regarding the process of its creation, and yet I failed to make an image of the final object! I am working on contacting the buyer so that I can get this image, but in the meantime you will have to imagine what the final object looks like, based on the process for it. This works great for me anyway, since much of my work is focused on the process of its creation rather than the final product, which I call "residue".
Still, here is a picture of the latest stage of the piece that I remembered to document, when it was still very far from finished. 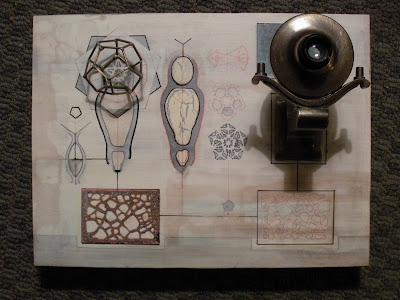 As you can see, it is a flat surface which I have drawn on, and it also has physical objects in it. I have always been fascinated by the contradictions and connections between dimensions. In this case, the object attached to the right is a "window"; a viewer, much in the style of my Vision Chambers. Similar to these, this viewer is intended as a type of portal; a viewing frame that transports the viewer, dimensionally, to a different place. The piece toys with the idea of an interplay between what is seen in the window and what is seen in the surface. The drawings in the surface are a raw simbolic repreentation of what is depicted inside the viewer. This idea is inspired by much of the world of Art, where an idea so powerful as an artist's vision, can only be represented through matter in representational, limited ways (hence my term "residue" to occasionally describe art objects)
As I am talking strictly about technical things right now, you may wonder what this piece is really all about, to which my only answer can be: "I may speak of this secret without using words". However, if you stick around through this conversation you may get a sense of something.
So, this is a surface image of the viewer before it was attached to the piece... 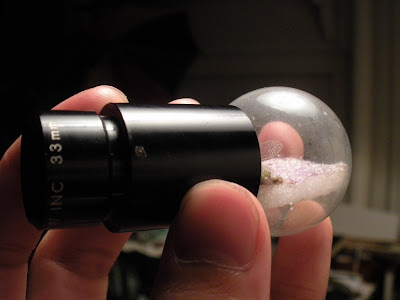 And this is is an image of the proportional size (to my hand) of the contents of the viewer... 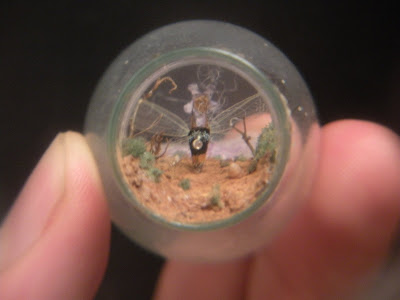 And next is an image of a part of what you may see when looking through the viewer (and here you are going to have to understand that: 1) this is impossible to photograph due to focal lenght, size of chamber aperture, light, depth of field, etc... and 2) everyone has a different visual experience when looking into any of these types of chambers.) 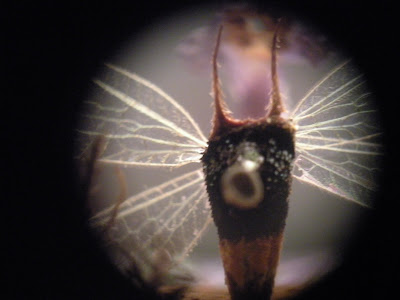 Ok, enough technical stuff, we can get to some of the more in depth layers of this work, though I cannot guarantee that I will actually talk about anything too concrete, since there are plenty of places to rationalize, solidify and explain things, everywhere in this world. Instead, there is a movement toward the mystery of all things, the sacredness of things, that needs be respected and not tagged with labels. 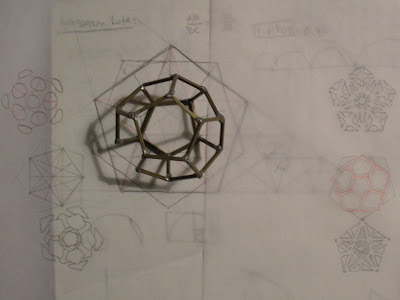 There was a neat thing going on in the early stages of this piece, while I was still just imagining, dreaming and visualizing it. After many sketches and thoughts about it, I finally approached the surface of the piece. Working with the ideas that I was working with, I felt a strong atmosphere of connections and power. Many little special things happened while I was at work, and they all seemed to synchronically confirm that something good, and very fascinating was happenning. To share one of these, I filmed a consistent event that occurred as I was designing the piece, and that was consistent with the intentions I had prepared while ideating/ritualizing the surface:
"Magic Energy Embedded Onto Artwork"
I need to add that there appeared to be no trace of static electricity on this surface, since I kept running my hand throught it trying to feel it/neutralize its effect, to no avail. The same thing kept on happenning no matter what I did, for a long time. I called it "magic" energy because the types of energies that cause this kind of physical phenomena usually follow entropy and therefore exhaust their power soon after being tapped, especially if they are affecting other objects (unless there is a kind of "unlimited source" for the energy!) In this case, the energy did not seem to wade.
Ironically, as I intended to not speak of the secret behind this piece, I contradicted myself in the very early stages of its creation. In my sketchbook, I created a text called "attempt for a written description regarding the concept behind the Metabiotic Cosmos"! I just couldn't help myself to try to define what I was creating, even as I knew this was impractical. In many of my statements of art I have declared that art is the ultimate anti-art, because as we attempt to materialize Spirit, we "de-Spiritize". This is why I stand strong next to the idea that art is most sacred and powerful to the artists that enact it, more so than to the observers who experience the residual products (by the way, give it a try!)
I will share these conceptual pages of my sketchbook, which show the original thoughts behind the creation of this work, as well as the contradictory descriptive text page. If you are persistent enough to attempt reading my handwriting, and if you can hear the message of these words with uncluttered ears and an opened Self, you may just get a glimpse of what I have not been talking about. Ultimately, there is nothing I could say or do, even if I tried, to share this secret, since this is a kind of spiritual contract that I experienced in my own body and soul, and that each of us may choose to sign and commit to individually. That is, as far as I have learned, the only way in which one may enter. 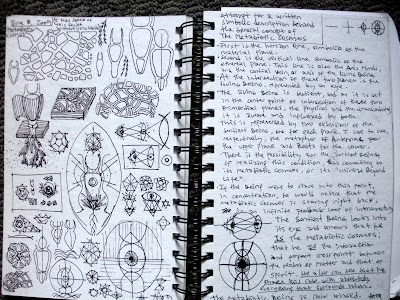