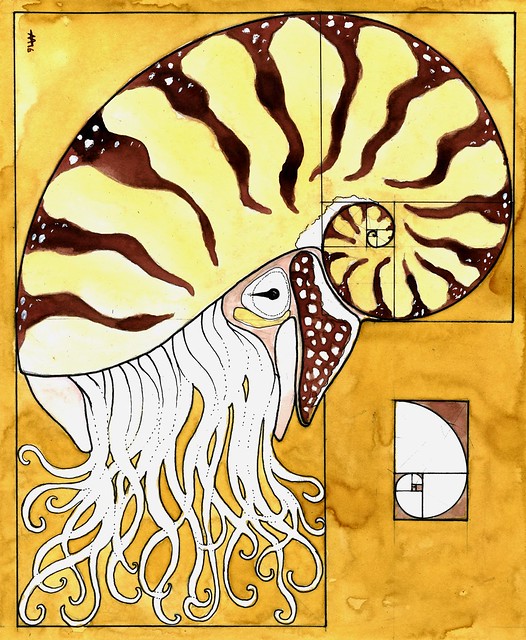 During the last 40 years of the Zekliphto Dynasty of Tlanta, Mefistenom, ruler of Perinesia declared the “Golden Nautilus” (as we might call it) as a treasured object of his desire. He sent out order to his men to find the creature at all cost, and even placed a reward of two hundred and twenty-eight Yemets (enough to sustain an entire village for three generations) to whomever may bring him a single, unscathed specimen of the elusive sea-creature’s shell. Mefistenom had by then acquired just about every other imaginable rich and exotic treasure known to the world of Tlanta.

Known locally as Maukramium  Aurus, this legendary creature had come to Mefistenom’s attention via his court oracle, a mysterious woman by the name of Tiabatha Muriem. Tiabatha had told Mefistenom that it was not the pure gold comprising the creature’s shell that held its true value.

The Maukramium was an ancient creature, older than Tlantan civilization itself. Legend told that only this single being represented the entirety of the species, born from the will of the Sacred Source, for an unknown reason. To hunt for and find this most rare token was enough enticement to Mefistenom’s caprice, and yet, Tiabatha had said, the true value of the creature lied in the proportions of its spiraling shell. Encoded in the ratios and form of Maukramium’s golden shell, Tiabatha explained, was a hidden message: the secret behind life and death, the ultimate key to the sacred mechanism of the universe.

Mefistenom summoned a most vigorous search party, recruiting skilled sailors, fishermen and special emissaries from all over Perinesia and abroad. He even ordered the construction of fifty submarine vessels, ones that required unprecedented use of technological and engineering skill and knowledge.

A search campaign unlike any other in the oceanic history of Tlanta had been put forth, scanning the coasts and main bodies of water comprising the accessible majority of the Audrean and Perinesian seas. Submarine posts were established from the Gulf of Sudame, through the Ajurian Rift all the way to the mouth of the Igpis Delta.

While arguably beneficial to the growth and technical development of the Perinesian culture, court advisors and elders worried that Mefistenom’s obsession was becoming evermore costly. A few covert attempts were made to procure a counterfeit replica of the shell to present to the ambitious ruler as a trophy that may quench his thirst for treasure. It only took one quick glance from Tiabatha Muriem’s eyes to affirm that the real Maukramium Aurus was yet to be found.

A group of most experienced seamen (those credited with the design and construction of the Anubius Vessel, the only ship capable of traversing the entirety of the Audrean sea in one continuous trip) had requested an audience with Mefistenom in regards to the Maukramium.

The Anubius men told Mefistenom of their firm conviction that, if such creature were to really exist, it most likely resided in the oldest depth of Tlanta’s oceans: a dreaded deep-sea canyon known for absorbing ships straight out of the surface, called Ourukatam, or “swallowing sea-beast”.

Seeking advice from Tiabatha Muriem once more, Mefistenom brought the wise woman to the round table. “These men are right.” She said. “Ourukatam is the hiding place of Maukramium Aurus. I sense it now, in the salt of their hands” She said. An air of excitement filled the room.
The leader of the Anubius men stood up and requested, on behalf of his group, to be given the honor of pursuing this dangerous mission. “What’s in it for you?” Asked Mefistenom, “you would risk your life just for honor?” The Anubius leader replied: “Exploring the oceans is our life.  Even the opportunity to glance this creature once would complete our purpose.”

“No.” Interrupted Tiabatha taking a step forward, looking into the distance as if in the middle of receiving a message. “These men will not bring Maukramium. Any sailor may reach Ourukatam, and even find Maukramium in its lair. But once retrieved, only a ship manned by high royal blood will be able to make the return trip with the creature aboard. Besides, he who first glances the Maukramium shall receive its full power”. “It is decided then.” Proclaimed Mefistenom.

Two weeks later, a fleet of twenty ships led by Mefistenom himself departed from the Port of Machuria. Fifteen of the ships contained Mefistenom’s untrained-for-sea royal servants, court advisors, guards, etc. The other five belonged to the Anubius men who had offered to escort the royal fleet to their destination. Tiabatha Muriem was to stay in the mainland and provide feedback and advice using her oracular powers and the aid of messenger birds.

By the third month of travel, as the fleets approached the perimeter that comprised Ourukatam, one of Tiabatha’s birds brought a warning for Mefistenom: “Send the fleet back now. To achieve your goal, you must complete the journey on your ship alone”. And so, the ships returned to Perinesia and Mefistenom’s vessel entered Ourukatam on its own.

That was the last anyone ever saw or heard of Mefistenom, the last ruler of the Zekliphto dynasty. Whether he ever caught a glimpse of the Maukramium Aurus or not, we will never know. Back in the mainland, Tiabatha Muriem ordered all of Mefistenom’s riches to be divided amongst the people of Perinesia. Copious amounts of horded treasure allowed for each citizen to receive a substantial portion.

Tiabatha Muriem gave land to the remaining royal servants and urged them to become just leaders. She gave generous compensation to the families of all the sailors, fishermen, hunters and explorers lost over decades of Mefistenom’s treasure hunting campaigns. She also paid the engineers and designers of the fifty submarine vessels, and gave said vessels to the Anubius men.

Finally, Tiabatha Muriem paid for the construction of buildings that would act as centers for the disbursal and creation of knowledge. Then, she smelted the remaining gold and paid the city’s welders to forge coins of equal value to be distributed equally amongst all the citizens. In the frontal face of the coin, she had the welders forge the symbol of a new era: a depiction of Maukramium Aurus.

Tiabatha then left Perinesia with nothing but a satchel of food and water, never to be seen or heard of again. The story of Mefistenom, Tiabatha and the Maukramium Aurus quickly spread through the entirety of Tlanta, marking the beginning of the first Age of Wisdom and the five-hundred-year-long era of the Fair Rulers of Tlanta.