When asked recently to share a link to some of my work online, I realized just how outdated my blog was! My most recent entry was in 2014... ooops. It could be easy for someone seeing that post to think that I've been inactive, or that I haven't produced any work since, but this is far from the truth. At least for me, usually focusing deeply on the production of artwork goes reversely proportional to the time spent on publicity/disbursal. Art takes time. So I decided to catch up and share some of the "art things" that have emerged since. Roughly, as of the last post, lots of things have been going on...

Many things have remained the same. I've been teaching around the clock, being a good daddy, and finding love in the simple things... 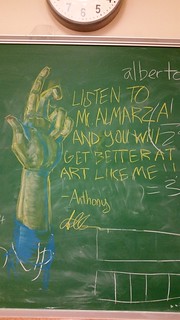 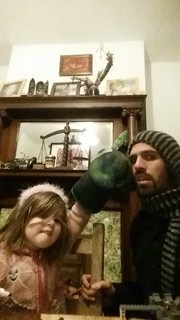 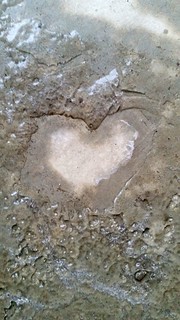 Things in the laboratory are looking up... 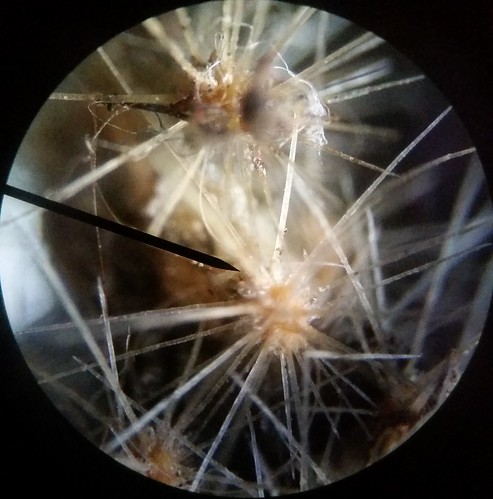 Been exploring some cool geometric stuff...
And continuing to observe and study nature. 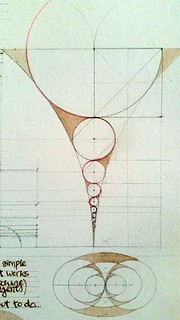 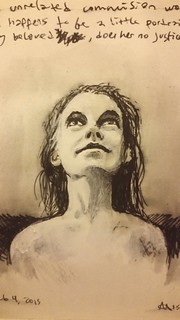 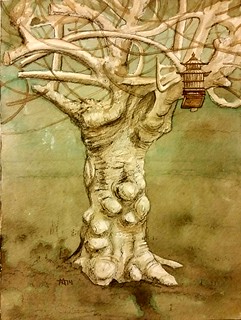 I've been maintaining a healthy diet, 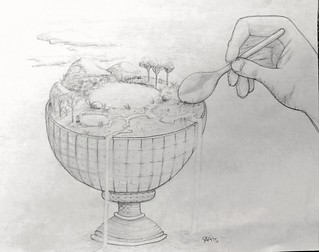 ...and generally I can say that all the worlds and their various inhabitants have continued to grow, prosper and even thrive. 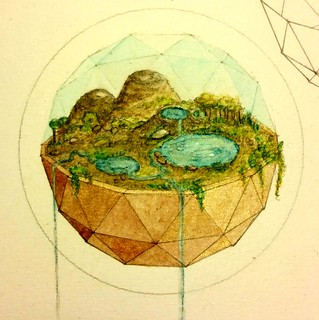 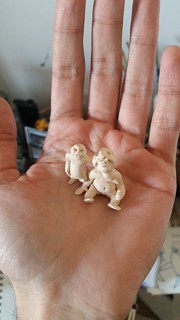 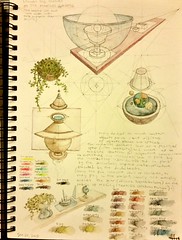 (I've been actually doing a whole lot of writing; little stories here and there, and working on the arduous and slow production of a book that still has many years ahead in its making. I suppose if you are interested I could share a lil somethin, not my best one, mind you ;) for which I will make a separate post. It's called "Beware the Golden Nautilus") 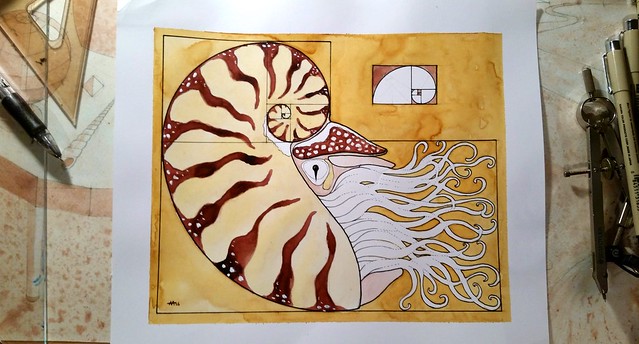 The drawing came first, and from it emerged the story, which is in itself independent and yet peripherally connected to the aforementioned book.
I am usually so serious and particular about the concepts in my work that it can slow and even stop my ability to create. This and some of the following works are more recent and born of a decision to just create drawings spontaneously and quickly, acting more like exercises. As such, they still have turned out pretty solid, and fun. 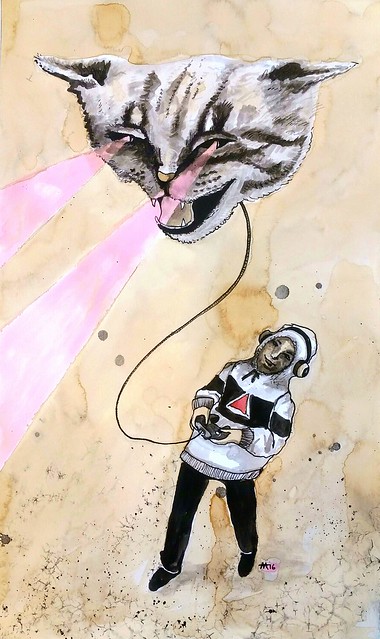 This one is called "Arcade 2020" and it has surreptitiously but surely begun to shape another short story of its own. I did this and the following ink drawing called "Chicken Mech" during a couple of my lunch breaks, between teaching at work. I honestly don't have as much time as I would like to make art. 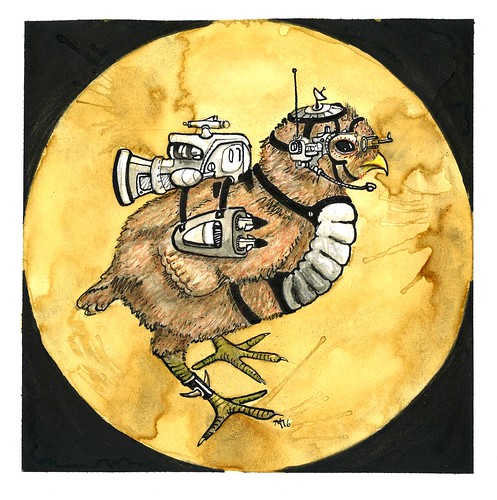 Sometimes being around kids so much makes my work go coo coo, like Chicken Mech. Kids love that piece. If I happen to be working during class, like in the case of the next painting (which I did last year while teaching the 11th graders how to paint) then the stakes are high and I better do well. Sometimes this can yield pretty decent quick artworks, like this acrylic on canvas painting of an Artifact Landscape: 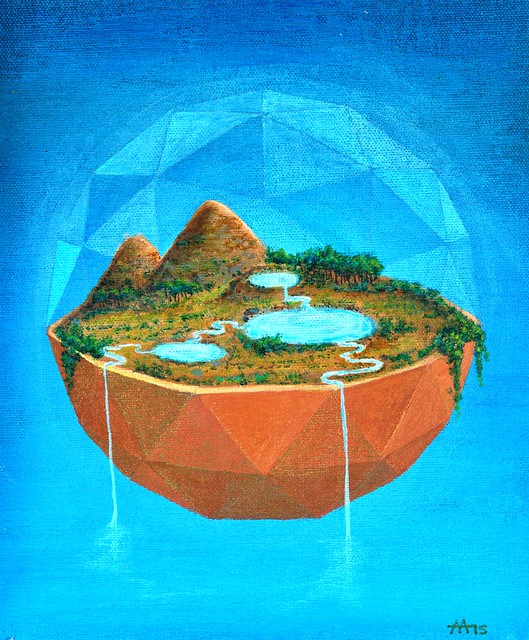 I say this piece was quick because of its execution, working a little each class for about one week, maybe a total of ten hours max. That is short for my usual timeline creating a piece. But things like the geometry of that sphere, the idea and the methods used to create it have taken me some years to develop. Doing sketches and process for it surely helped too.

My work is generally very time-consuming otherwise. I tend to get really immersed in concepts and pieces that take a lot of research, tons of tedious work and patience. These are the kinds of works that I am usually most proud of and also the ones that end up coming out every other solar eclipse or so...
For these types of works I like to make more elaborate and individual blog posts, because I think it's cool to be able to share some of the more intimate aspects, details and hardships of art-making.

Among these works are a series of optical illusion drawings that really challenge the way in which we perceive space and the relationship between two and three dimensions (a most common theme in my work). I call them "Concave Convex Corners", or "Concavexerners" for short. 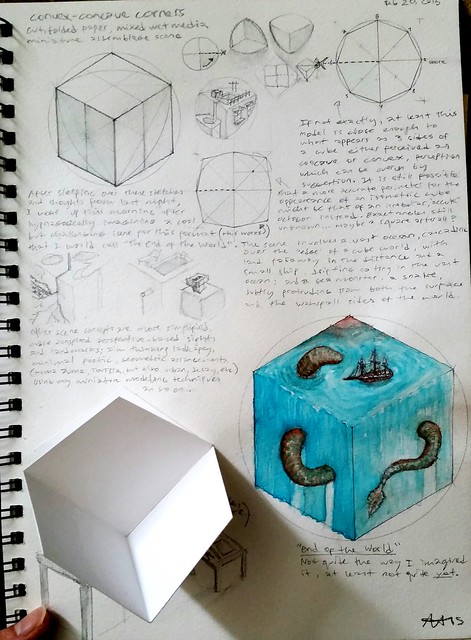 But perhaps the single most exciting artwork that I have created recently is a drawing called "Mouseion Torisiae", or "Museum of Torisian Curiosities", which may actually be a first of its kind.
It was drawn using equi-rectangular perspective and formatted to work as a photo sphere. In other words, it is a drawing which the viewer can literally enter and experience immersively, looking at it all around with a 360 degree vantage point. This drawing took me SO MUCH WORK. Now that I figured it out though, it should be a relatively easy format to make use of, and you might agree that it is worth it! Here is a simple image of it, but to get the most out of this drawing make sure to check out the post, where you will get to see more about the process, learn how to best view photo spheres, and maybe even create your own! 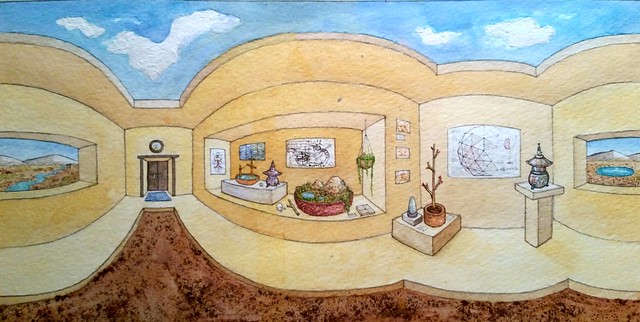 I hope you've enjoyed this very belated update, stay creative, and as always thank you for visiting my blog.
Best!